If you are looking for an affordable solution for streaming your favorite movies and TV shows over the Internet, both Mi Box and Fire Stick are attractive options. They are quite budget-friendly, and they both have received plenty of positive reviews. So, which one is actually better? Read the comparison between Mi Box vs Fire Stick below to find out! 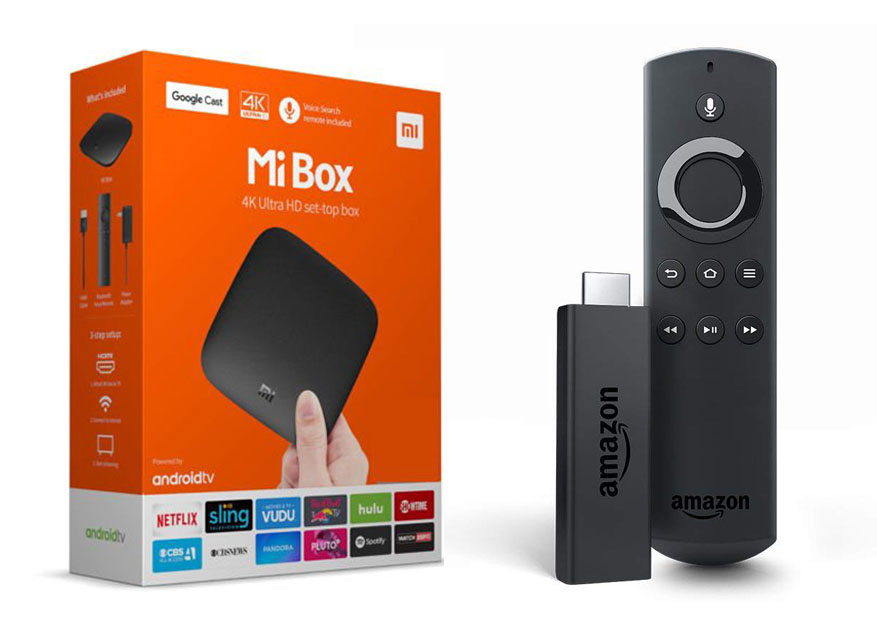 In this article, we will discuss about:
– The design and dimensions of each TV streamer here
– Which model that is easier to set-up and use
– The apps or channels that are available on each platform
– The overall performance of Mi Box vs Fire Stick
– Whether you should get Mi Box or Fire Stick

Design
In terms of design, these two models are very different from each other. Well, they both are generally compact and lightweight, but Mi Box is still much bigger than Fire Stick. This is something to consider if you have some strict space limitation. See also: Nvidia Shield TV vs Roku Ultra.

Mi Box is designed like a traditional set-top box, but it is indeed much slimmer and smaller than real set-top boxes. The unit measures 101mm x 101mm, with a thickness of about 19.5mm. It has a weight of about 176.5g. The casing has a black finish.

Fire Stick can be a much better choice if you want the most compact and portable TV streamer ever. The shape of this unit is similar to a flash drive, except for the connector. It has an HDMI male connector instead of USB. It will plug directly to your TV, so it doesn’t really require any space of your room.

Connectivity
Mi Box’s connection ports are located on the rear. Here, you can find the HDMI port, USB port (for plugging a flash drive for additional storage), 3.5mm audio output, and power port. In addition, Mi Box supports Bluetooth 4.0 and 3.0 as well as 802.11a/b/g/n/ac Wi-Fi for the best wireless performance.

Fire Stick has a Micro USB port, but only for power. It can’t be connected to a USB flash drive.And note that it needs to be plugged to a power source in order to operate. In addition to the HDMI connector, the latest version of Fire Stick also supports Bluetooth 4.1 and 802.11ac Wi-Fi, so the wireless performance is also guaranteed to be good. 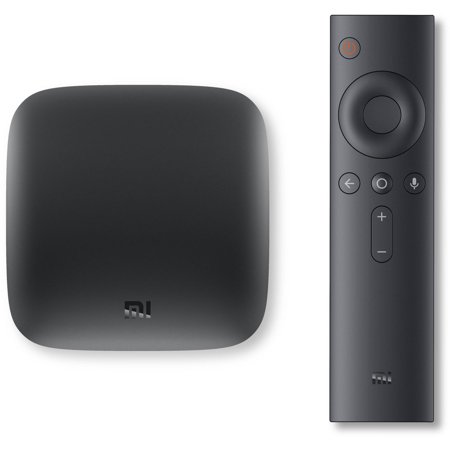 Set-Up
Setting Mi Box vs Fire Stick up is incredibly easy. This is actually more because of the Android TV operating system rather than the Mi Box itself. But Mi Box still deserves some credit for going closely to the specifications required by Android TV to run smoothly. After you connect the HDMI cable to your TV and the power cord to a power outlet, configuring Mi Box is very simple.

You can run the Google App on your smartphone or tablet during the initial setup. This will beam your existing Wi-Fi settings and Google account to the TV streamer, so that you don’t need to type anything. This will also enable your smartphone or tablet to be used as a secondary remote or keyboard. Then, you can proceed to set up your accounts for the streaming services that you use.

Fire Stick is also easy to set-up. However, it is very clear that this product is aimed specifically towards Amazon Prime users – perhaps it also aims to pull more people to subscribe to the service. Without Prime, you won’t get the most out of Fire Stick’s capabilities. Fortunately, Prime has become quite more accessible now.

After you plug the unit into your TV’s HDMI slot and connect the Micro USB port to a power source, just follow the on-screen instructions. It will guide you to pair the included remote, hook the Fire Stick unit to your home’s network, and sign into your Amazon account.

Remote and Voice Command
The remote control of Mi Box vs Fire Stick is fairly simple. The slim, compact design is easy to hold. It uses Bluetooth. There are just four directional buttons, an enter button, a home button, a back button, and a special button for activating Google Assistant. It doesn’t have any button for fast-forward or rewind.

Of course, Mi Box supports voice command through Google Assistant. The remote has a built-in microphone to allow you to speak out what you need. Google Assistant is a solid service; the system is mostly able to recognize commands and queries accurately, and the results are generally good.

On the other hand, though, Fire Stick also comes with strong points in this aspect. The remote is arguably better because it has fast-forward, rewind, and play/pause buttons. In addition, there is a special button for voice command. When entering a voice command, you need to keep pressing this button until the end of the voice command. It ensures that the device will listen and take the complete command instead of stopping tracking halfway through.

Of course, Fire Stick has Alexa. You can do a lot more things with Alexa than any other standard voice command system. Alexa is quite smart, as it is able to understand complex queries. The results come out fast and mostly accurate.

Apps and Performance
Mi Box gives you access to Android TV’s app store. There are great apps here, including Netflix, Showmax, and DSTV. However, there are a few popular apps that are missing here. As the effect, the app store may feel a bit sparse. Fortunately, you can use the built-in Chromecast feature to stream anything you want form your mobile device and beam it to the television.

Mi Box is armed with a 2.0GHz quad-core Cortex A53 processor and 2GB RAM. It is able to play 4K content, but unfortunately the frame rate is not consistent. The interface also becomes slow and laggy when playing in 4K. As the effect, you will just stick to the 1080p resolution most of the time, in which the performance is smooth and stable.

On the other hand, Fire Stick offers a large library of apps and games. There are Netflix, YouTube, Sky News, Spotify, and Prime Music, among others. Nevertheless, as mentioned above, you need Amazon Prime to get the most out of this device.

The performance of Fire Stick is good. The latest version is armed with a quad-core processor and 1GB RAM. However, Fire Stick does not support 4K. The maximum resolution is 1080p. The frame rate is constant at the highest resolution.

- Launch and control content with the included Alexa Voice Remote
- Pick up where you left off. Bring hit shows and movies with you when you travel
- Enjoy tens of thousands of channels, apps, and Alexa skills with access to over 500,000 movies and TV episodes from Netflix, Prime Video, Hulu, HBO, SHOWTIME, NBC, and more
- Play current favorites or quickly discover what to watch next directly from the Home screen
Best Price Click Here

Conclusion
In general, Mi Box is more recommended. This streamer offers a better value for the money. It has a USB port for connecting a flash drive. The set-up and operation is very easy, thanks to Google Assistant. It also allows you to take a look at the 4K quality, although with unstable frame rates. You can just switch to the 1080p resolution for a smooth and stable performance.

CERTAIN CONTENT THAT APPEARS IN THIS SITE COMES FROM AMAZON SERVICES LLC. THIS CONTENT IS PROVIDED “AS IS” AND IS SUBJECT TO CHANGE OR REMOVAL AT ANY TIME.